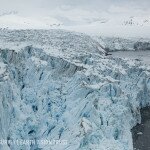 A large crevasse near the terminus of the Columbia Glacier. A sign of the glacier’s rapid movement and fragile state.

EIS first installed cameras at the Columbia Glacier in 2007. It is today one of the fastest moving glaciers in the world, with its recent retreat commencing in the early eighties. Glaciologist Tad Pfeffer, from the University of Colorado Boulder, informed us that the Columbia’s loss of ice, totaling now more than 600 meters in thickness and more than 10 kilometers in length, contributes to approximately 1 percent of total sea level rise (including both thermal expansion and glacier mass melt). This is truly astounding. The Columbia Glacier is one of the largest contributors to sea-level rise in North America and among the fastest retreating in the world. 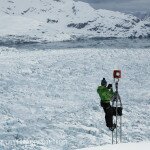 Hanging from a tower nearly 1,600 feet above the glacier, Matthew Kennedy anxiously checks on another EIS time lapse camera. It’s predicted that in the next few years all the ice seen in this image will be gone.

Approaching our first EIS camera site, located at an elevation of about 1,500 feet, we circle the snow-covered mountain looking for a feasible landing spot. After safely landing, we hike through fresh snowpack, carrying with us a new solar panel and battery to replace the equipment on one of our longest recording camera sites. The high snow cover turns out to be a blessing, as it makes access to the camera equipment easier—the camera is positioned about 30 feet above the ground; without snow cover, lifting equipment for the change-out would be far more complicated. We are pleased that the camera is still in working order, and our task at site one is successful. 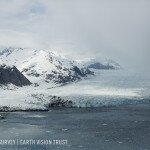 The jagged and retreating terminus of the Columbia Glacier. Patchy rain, snow, and fog required quick work at the EIS camera sites.

Sun breaks through the clouds for some nice views of the Columbia, and we fly over to our second camera location, positioned on the north side of the glacier. Unfortunately, the battery in this camera has died, likely due to the massive amount of water we find in the battery case. This is disappointing, but we grab the data recorded and prep the camera for a change-out on the next possible visit. We have to move on and head back, as the clouds are beginning to roll in again. We won’t be able to do the repeat photography this time, as removing the helicopter door given the weather and timing isn’t feasible this trip.

Flying over the glacier on the way out, we see a tall mud moraine developing on the northern flank of the glacier, separating itself from up-valley glacier mass. Evidence of glacier lake formations, flood outbursts, steeply incised crevasses, and newly formed beaches visible on the Columbia’s forefront, all signal its rapid and irrevocable loss. It is literally breathtaking, and I feel truly honored to be able to witness a glimpse of the vanishing legacy of this massive, beautiful glacier.