I look through nearly every image the Extreme Ice Survey collects from the Jakobshavn Glacier. I see the weather progress daily, clouds swirling hourly. 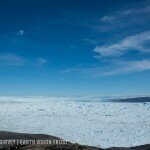 The terminus of the Jakobshavn Glacier seen from 15 km away (roughly the distance it has retreated since 2001) transports ice from the Greenland ice-sheet and continually fills the Ilulissat Icefjord with a mélange of icebergs. Extreme Ice Survey

I witness colossal calving icebergs, dramatic Arctic sunrises and sunsets, the first time the sun peeks out after a long winter of hiding and its last offering of warmth before it retreats below the horizon again several months later.  The perspective that I don’t get from my twenty-four-inch computer screen is the scale. It’s impossible.

I’m now looking directly at the behemoth and I begin to grasp the dimensions of Greenland’s largest glacier. In simple terms, if it were possible, the world’s fastest runner would need the better part of thirty minutes to traverse its terminus. An experienced climber could expect to spend half a day scaling the terminus from ocean to its top. Now add the glacier’s dynamics. It contributes more ice to the global ocean than any other glacier in the Northern Hemisphere, made instantly evident by the gigantic sapphire-blue iceberg currently sitting directly in front of the terminus. Bottomless crevasses stacked up and stretching the width of the glacier’s south branch indicate the speed at which Jakobshavn moves. It ranks as one of the world’s fastest glaciers. It’s an open floodgate on ice pouring down from the Greenland ice sheet. 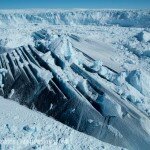 The cameras I’m here to check on and swap sit on the southern side of the fjord about 5 km from the center of the south branch of the glacier. Malik, my Greenlandic pilot, gently sets the helicopter down 100 meters from the cameras and my nerves begin to rattle. The effort we put into getting here was significant. I walk toward the cameras, doubts about whether or not they have been working for the last year building with each step. I check the structure of the post mounts and guy wires. They are fine. Then I check the battery voltages and without even looking into the pelican housings, I know that one camera is not working. A dead battery. I open the housings and discover that, indeed, one camera quit working in late December (probably due to a cold snap). The other two have been functioning perfectly. I lug the seventy-five-pound backup battery I thankfully brought to the camera, splice a few wires, and quickly install the new higher resolution Nikon D3200 cameras. All the systems are up and running, ready to spend another year at the terminus of the Jakobshavn Glacier, recording its change.

The stress and uncertainty that led up to Ilulissat wears off just as fast as it takes to fly back to Ilulissat. I watch the sun reach for the horizon one last time and wonder what the condition of the glacier will be next year. The trip is a success and I head back home with another year’s worth of imagery to add to our continually growing time-lapse archive. 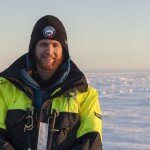