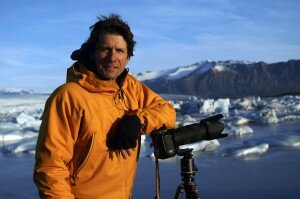 James Balog (“BAY-log”) has been a leader in photographing and interpreting the natural environment for three decades. An avid mountaineer with a graduate degree in geography and geomorphology, James is equally at home on a Himalayan peak or a whitewater river, the African savannah or polar icecaps.

To reveal the impact of climate change, James founded the Extreme Ice Survey (EIS), the most wide-ranging, ground-based, photographic study of glaciers ever conducted.  The project is featured in the highly acclaimed documentary, Chasing Ice, which won the award for Excellence in Cinematography at the 2012 Sundance Film Festival, as well as dozens of awards at film festivals worldwide.

Chasing Ice was shortlisted for the 2013 Academy Awards. It has been screened at The White House, the U.S. Congress, the U.K. House of Commons and the United Nations. It has been the subject of features on the NBC Evening News, ABC Nightline, The Late Show with David Letterman, PBS’s Moyers & Company, and Real Time with Bill Maher.

James has been honored with many awards, including, in recent years, the Heinz Award, the Missouri School of Journalism’s Honor Medal for Distinguished Service, the Aspen Institute’s Visual Arts & Design Award, and the North American Nature Photography Association’s “Outstanding Photographer of the Year” award.

Mr. Balog is the author of eight books. ICE: Portraits of Vanishing Glaciers was published by Rizzoli in 2012. Among his other titles are Tree: A New Vision of the American Forest (2004) and Survivors: A New Vision of Endangered Wildlife (1990), hailed as a major conceptual breakthrough in environmental photography.

James’ work is in dozens of public and private art collections, including the Museum of Fine Arts Houston, the Corcoran Gallery, the Denver Art Museum and the Gilman Paper Company. It has been extensively published in most of the world’s major pictorial magazines including The New Yorker, National Geographic, Life, and Vanity Fair. National Geographic showcased EIS in major features in 2007, 2010 and 2013. EIS is the subject of a 2009 NOVA/PBS documentary, Extreme Ice.

James lives in the Rocky Mountains, near Boulder, Colorado, with his wife and two daughters.

“Each new series by James Balog represents a quantum leap in creativity, which takes us deeper into the ultimate mystery of humanity’s relationship to the natural world. He is a visionary and his works are like sacred objects.”
—James Nachtwey, TIME magazine photographer

We are pleased to announce that James Balog has been selected as a Nikon Ambassador. The Ambassador Program will create a mutually beneficial collective to help bolster the photo industry and inspiration.

Nikon Ambassadors are some of the most talented and influential visual artists working in the business today. These gifted, spirited storytellers go above and beyond most, and are admired for their passion, energy and commitment to their craft. Their investment in, and trust, of the Nikon brand are cornerstones to their image making abilities.

As a loyal Nikon partner, Nikon Ambassadors’ commitment and contributions to the photographic industry throughout their careers have influenced and inspired photographers around the world; while their desire to educate and empower other image makers around them has become a part of their daily business. From workshops to trade show platforms, online learning and social media; Nikon Ambassadors represent the most versatile and ambitious photographers today. These visual artists are respected around the globe for their vision and accomplishments.

The dedication to advancing the art of visual storytelling while embracing and mastering the latest technologies and trends in the field are paramount to these photographers being selected as Nikon Ambassadors.

As the top visual storytellers of this era, their advanced techniques, unprecedented creativity and tenacious approach to imaging solutions is demonstrated assignment after assignment, each and every time they pick up a Nikon camera.

“For the EIS project, we used Nikon D200 and D300 bodies, secured in weatherproof housings. Powered by solar panels, batteries and other electronics, they are able to withstand temperatures as low as -40˚F and winds as strong as 160 mph, as well as blizzards, landslides and avalanches.”